One of the defining traits of the Transformers is how they ... transform.  The card game is so excellent because the flipping mechanic effectively stands in for the transformation. But some characters in our beloved TCG actually do not flip at all.  Battlemasters and Weaponizers are one example, as they only change when they are knocked out.  But the game also has some characters that don't even do that - Brunt Artillery Drone and Slammer Combat Drone never change into anything - the back of their cards doesn't even have anything!  The challenge in this article is to build a deck around bots that don't transform. 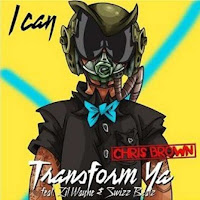 For purposes of this exercise I am limiting my cards to official TCG cards (wave 1-5).  There are a lot of excellent fan cards out there, but since not everyone has or can get them, I'll stick to the ones everyone is familiar with.  The fortressmaximus.io visual depiction of the deck is included at the end of this article. 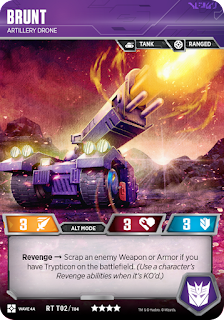 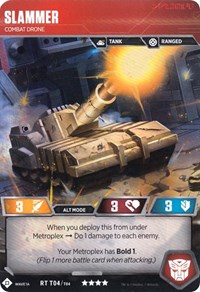 Brunt and Slammer are two of the lamest characters in the game, but that's the whole point of this deck.  I then tried to pick battle masters that would complement them and each other. Smashdown and Blowpipe likes having lots of colors being flipped. Turbo Board rewards flipping a blue and orange pip when you flip.  These three guys seem to play well together (as a side note, they'd really be a killer team with Brawn)

Why these battle cards:

Quartermaster is easy - since my team sucks, I'll need to reclaim Smashdown, Blowpipe, and Turbo Board (in their alt forms) from the KO pile if they get scrapped.  Because I want them to die first so they can become upgrades, I am using stealth and bravery (Stealthiness, Bravery, Immersed in Shadow, Point Position, Step Forward) for probably the first time.  I also tried to get cards with multiple pip colors. The best of these for this deck is Wedge Formation, which has three colors and rewards the fact that I have melee (Smashdown), Ranged (Brunt, Slammer, Blowpipe), and Specialist (Turbo Board) characters on my team.  Both of my main characters are tanks, so Composite Armor seemed like a good choice, especially since it has two pip colors.  Given the fact that my guys are going to die fast, I thought Emergency Maintenance would help.  Peace Through Tyranny gets me two orange pips and also allows me to KO Turbo Board if I want to get him into upgrade mode.  Finally, I am a sucker for the Ancient Wisdom/Unleash Potential combo. I tried to get plenty of blue and orange pips to help with the three battle master powers.  When Turbo Board is in Anti-Gravity Turbo Pack mode, he allows you to play an orange or blue card you flipped, so I leaned pretty heavy into actions.  Since Smashdown and Blowpipe turn into weapons, I didn't really put any into my battle card deck.  This may be a dumb move.

Well, at least you don't have to figure out who to flip... This deck feels cool because I pulled off the gimmick, but you have only 31 total team health and 12 ATK (prior to upgrades) so you are pretty much going to get blasted.  If you get a bravery battle card, use it on the battle masters. If you get a stealth card, use it on Brunt or Slammer.  Maybe if you convince your opponent before the game to try a game where neither of you flips any characters you might win.  Either way, you can revel in the fact that you made the most un-transformers Transformers TCG deck possible. 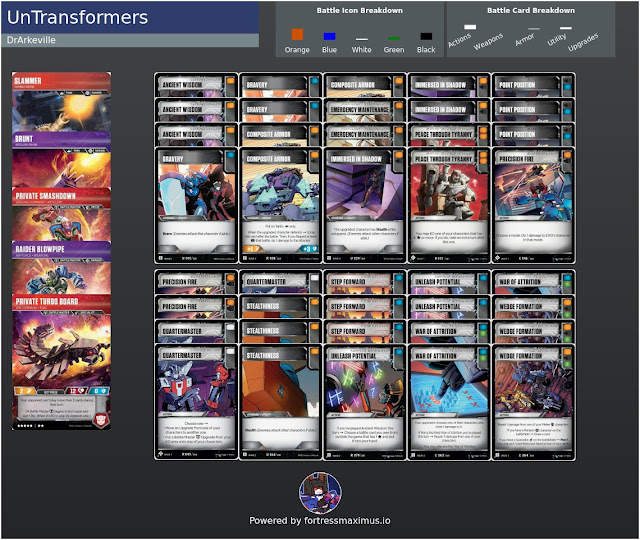 Email ThisBlogThis!Share to TwitterShare to FacebookShare to Pinterest
Labels: no transform, weaponizer